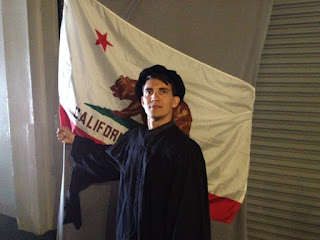 and the picture to the right is me at my graduation from CCA. I didn't mean to align my fist so evenly with the flag; it just turned out that way. Though I liked wearing the gown and the silly hat, the graduation was a little dull. The school crammed all the graduates off to the side of the stage, behind large wooden beams. I could barely see the audience or the speakers. It was very hot. I sat with two peers whom I am friends with but we could only entertain ourselves for so long. I don't even remember the main speaker's name now, but I wasn't impressed. Some representative from CCA introduced this main speaker by listing all the reasons we should be impressed by him. He had done a lot of things; like inventing the first laptop or something like that. Then this main speaker gets up and proceeds to give us his basic life story... including his accomplishments again. He hadn't come from some impoverished background or anything interesting. He was just a man who made good on his talents and now he was here at CCA receiving an honorary degree. He didn't have to pay 100k for his I guess. I'm sure he's fine person and it's good he's done what he's done, but I didn't feel inspired by his speech and let's face it, that's what these speeches are for. The rally your reserves! sort of speech. I know you've been through a lot and never doubt how important your art is to the world. Look at me! I invented the laptop for chrissakes! Ok. Thanks. I've never doubted why becoming writer was important. Just wondering if other people care. I think I've written about this before. Anyway, I guess it's not really this guy's job to get me excited about the future. That's my job. But still. It was hot. I would have been happy if he ended with CLEAR EYES FULL HEARTS. And we would yell back CAN'T LOSE.

A while ago I bought some Google offer deal groupon thing for Green Apple Books. I used it to buy David Graeber's Debt from Melville House. My teacher Miranda Mellis recommended I read it as part of my research for my next book - which I guess I should call another novel. So yes, I'm writing another novel. Anyway, Debt just blew me away. I read it in a week I think. Maybe parts of his book are obvious to others, but not to me. He surveys a few economics text books and shows how they falsely claim (and by claim I mean teach) that ancient peoples bartered and then invented money. Wrong. Credit existed before money and rarely, if ever, did people barter. He sets up credit as a moral dilemma. Guess which side he comes down on? It's not the banks. It's hard not to read the book, look at the world around us, and then wonder why things aren't changing. I think he even altered parts of my brain, how I view transactions, human and financial. I feel this is a rare thing these days. My brain being significantly altered does not happen too frequently these days. The paradigms up in my skull rarely shift but in regards to Debt the paradigm shifted. It was the perfect book to read for my next project and I took a lot of notes for the THING. 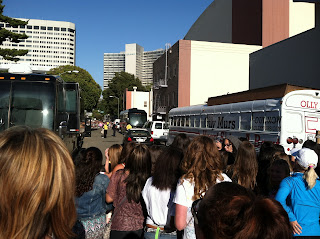 Not too long ago I also gave a reading as part of The Grinder Reading Series at the Telegraph Cafe here in Oakland. It was fun. The picture to the left I took right when I got off the bus to head to the reading. I was on the bus and all these teenagers started running by me and jaywalking across the street. Ahead of me I heard the screams of hundreds of young girls and boys, yelling and crying. I thought, Wow, I'm getting popular. All these people are coming to my reading? Of course, I knew this wasn't true; I just thought it because it seemed like a funny thought to have. So I catch up to this horde of teen-dom and realize all these girls and boys are screaming after some British boy band called One Direction. The energy level was insane. I could literally feel the VIBES floating in the air and I thought, How exciting! I wanted to shout at these busses too! Who are One Direction? I asked some crusty Oakland cyclists standing off to the sides with their bikes. They shrugged their shoulders. Then a parent told me they were a boy band, and she shrugged her shoulders like I Don't Know Either. I kept walking past the crowd and got to the reading.

I felt a little funny at first because 1) I had no book to sell 2) the reading was outdoors 3) I didn't know anyone too well. But, quickly, I realized it didn't matter if I had a book to sell, and the sun was nice, and then the organizer of the series Jason Schenheit, a SFSU writing pal, came up to me and gave me a big hug. I felt good then. I was welcomed. Obviously, I was never around for The Beats, but I had the impression this was a beat type audience. They talked back to the open mic readers and laughed and reacted to what was being read. Oh man, I thought, usually people just sit quietly and listen to what I say. Is this going to be like stand-up? Will I have to make witty banter, etc? After two readers I was up, as a featured reader. I guess this made me a little more important than the open mic'ers. I read three short works. The first probably worked the best because they were collections of random topics where I unbelievably (to myself) made some witty observations. I usually don't find myself too witty. But, the pieces worked and people laughed. Then the second work didn't work so well, at least not all the time. It had to do with my last name and how I don't say it in Spanish. JIM instead of HIM. I wasn't feeling the vibes when I read it. Like I was offending everyone. Maybe not. The last piece worked because I talked about Jodie Foster and attributed some fake quote to her. I guess everyone likes Jodie Foster.

I didn't stay too long after I read because I had forgotten to bring a sweater or jacket and when the sun went down, it became cold and windy. I hopped back on the bus home. It was a precision strike, I thought. I just went in there, read my stuff and got out. I wondered if anyone would remember me. Maybe they would, right? Eventually they'll see me somewhere. On a bookshelf or another reading and they will say, Hey, I remember you from that reading! Finally, I thought, it was so nice what Jason S said to me. He said, it was good to have someone at the reading with my kind of caliber. How amazing! I have caliber! I have caliber!

So, now, I'm finishing up Kevin Killian's Impossible Princess (one story left) and it's amazing. I can't help but wish I had discovered KK and the rest of New Narrative before college. I think some things would have been different - as far as writing style is concerned. Also, I'm finishing up Bret Easton Ellis' The Rules of Attraction. I guess I liked Less Than Zero. I definitely liked American Psycho (sometimes). I guess I prefer the movie, well, Christian Bale anyway. There are things to appreciate about RULES. It doesn't have a typical narrative arc. That's always pleasing. Like my best friend, Jason, said about it though, I just can't buy into his cynic view of the world. And I agree. Everything isn't so bad as Ellis believes. Then again, if you read Graeber's book you
Posted by Jason R Jimenez at 11:23 PM No comments: