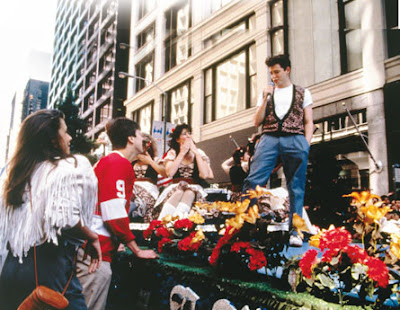 Last night B and I bought falafel and took them to McCarren Park for the free summer movie FERRIS BUELLER'S DAY OFF. We had already gone to two summer movies previously, but this particular screening was special for two specific reasons. One, it marked the final day of my best friend Scott's battle with the NY bar. Here's hoping he passed. Scott invited a large group of friends to the movie and it sort of functioned as his "I'm back from being a hermit" party. Two, the crowd watching the movie broke out into a giant dance party when Ferris sang Twist N Shout. I couldn't help but laugh when it happened. It felt so good to be surrounded by people enjoying themselves.
Editing WOLF/catherine has become intense and fills me daily with dread. A week or so ago I felt really great about what I was doing. Looking over the edits I found myself reading like an innocent reader. I could enjoy the prose and later pat myself on the back for being creative enough to come up with such an interesting story. I've been told that my writing is beautiful, but I never see it that way, and as much as I like reading my own work, I always wish to be more poetic. Though his influence only goes so far, F Scott Fitzgerald's ghost almost always hovers about me. He is an ideal in beautiful prose. Should I always try to make the words beautiful? I don't know. There's something in (my own) prose that I see. I call it beauty, if I do it right. It might not actually be beautiful, but when the writing has reached that point, I know I have done something. All of this is to say that lately re-reading the edited version has been devoid of beauty. I wrote to my teacher Miranda Mellis. I wasn't feeling as anxious as I am now, yet she still offered great advice. Walk away. Even if for a day, week, etc. Re-see the work and then go back to editing. I don't know if I can actually do that practically. I think I would feel worse not doing anything for a week, but I can at least separate myself from the dread. I can edit as I have been but leave the over-critical portion of my mind out of it. Once I've gone through this 3rd round of edits I can then look back over all the parts which I know aren't good enough. I can hold them in my hand, and I can actively set them back down. Walk away from them. Return days or weeks later and make them better.
I've just realized the comicality of this entire situation. What I'm talking about only amounts to probably 20 pages of work which are causing me these problems. Though it may go deeper than that. A fear that I cannot make them better. That I'm incapable as a writer to improve. I can't believe that.
Posted by Jason R Jimenez at 10:44 AM No comments:

The Hottest Reading On Earth 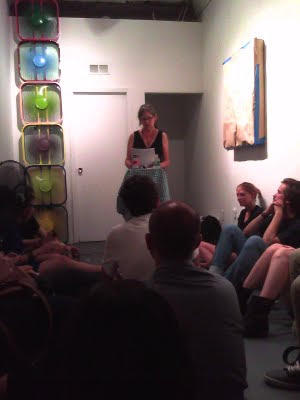 B and I went to a reading in Brooklyn at Cleopatra's: ESS ESS Sunset Series No.2 with Jo Ann Beard and Jibade-Khalil Huffman. The picture to the left is of Beard reading. Cleopatra's is a really small space. I'm not sure exactly what it is they do there. You can see the (possibly backward-facing) tower of fans attempting to cool the audience/reader off. It didn't do much good. They offered beer and popsicles and it was so hot everyone seemed to be dripping sweat. Luckily, both readers presented their work quickly and without much fanfare. I recently read an article about the horrors of literary readings. Some writers have no clue what they're doing when they read, or else they have no understanding that an audience doesn't want to sit through 30 or 40 minutes of droning.
So I appreciated Beard and Huffman's efficient delivery. Not being familiar with their work, I can't say much about it, but I was happy to attend a reading so close to where I live.
After the reading B and I went home and watched Harry Potter and the Half-Blood Prince. We've been on a HP marathon lately, preparing for a trip to the theater to actually see the final HP film. I've never read the books and don't think I ever will, yet the completion of Harry Potter's story (in film form) touches something in me. I don't identify with any of the characters really - if I did I would probably guess someone like Hagrid or someone silly like that. I also don't have a particularly deep passion for wizards and witches, etc. But, the completion of the story, of the EVENT of Harry Potter makes me love what it is. Has there been any other film series which has consistently used the same cast so successfully? Or what about the scenes in which Alan Rickman, Gary Oldman, and David Thewlis go to head to head in The Prisoner of Azkaban? All are serious (and seriously good) actors. I could almost forget I was watching a movie where these actors were not the main event. Add in Helena Bonham-Carter, Michael Gambon, Maggie Smith, Emma Thompson. The list could go on and does.
I guess I shouldn't be amazed that the Harry Potter series drew so many of the best actors to its casts. But for some reason looking back, it seems like the completion of the series is some sort of historical event in film.
Posted by Jason R Jimenez at 10:51 AM No comments: 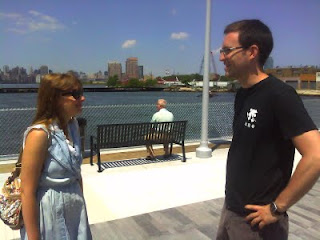 I've been in New York (Brooklyn) now for two weeks. The picture to the left is of B and my very close friend (and old college roommate) Mark at the pier in Greenpoint. The East River Ferry just opened about 3 or 4 weeks ago. B and I have been meaning to take it somewhere but we haven't had the chance just yet. Our nights have been filled mostly with cooking at home and eating out on the balcony, watching pedestrians walk beneath us. I've also begun editing for the third draft of my novel, WOLF/catherine. The first part WOLF is being edited now. The second part catherine is only in an initial draft form. B read a few pages of it and recommended a lot of good ideas. But for now WOLF has my attention. I've reworked and rewritten the first 7 chapters of WOLF. Thankfully, I think I'm doing a good job. The first 4 chapters of the book were written back in August 2010. As I got further into the book/story, the writing and style changed slightly and my control over the narrator strengthened. So to go back to the beginning chapters was sometimes horrifying. I couldn't stand to read what I had done and looked forward to rewriting them. This is why I say 'thankfully' - because had I rewritten the first 4 chapters, reread them and still felt a deep sense of failure, I think I would be in trouble. My teacher/mentor at CCA, Dodie Bellamy, repeatedly told me that the beginning and ending of a book are extremely important. I think that the end of WOLF is great and when I read it I feel happy with it (though of course I know I will likely change it in some way; it can always be made better). However, the beginning, I felt, was just horrible. Now, I read the beginning and I feel good about what I've done. I have a confidence that wasn't there before and I won't be so nervous sending it out to editors/agents/publishers, etc. 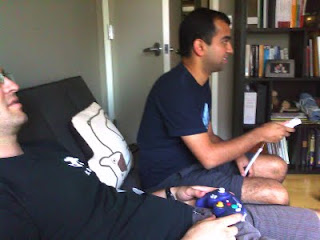 After B, Mark, and I finished our walk through Greenpoint and Williamsburg, Mark and I took the train and a gypsy cab to Mark's high school friend Mohan's house, also in Brooklyn. The picture to the left is Mark and Mohan preparing to play Super Smash Brothers on Wii. Sophomore year of college I moved in with Mark and two other friends (File and Ari). Mark got us all hooked on playing 4-player Smash Brothers. My favorite character at first was Bowser. His moves were simple and powerful, but he was also slow and lumbering. After I became a better player I switched to Zelda and her alter-ego Sheik. I prefer Sheik's speed and agility. She has no defense though so it's difficult to play people like Mark and Mohan who are by this point in their lives expert Smash Brother players. 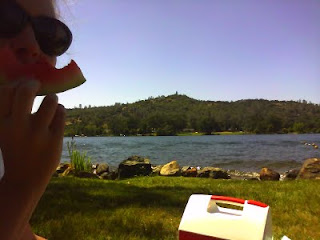 The picture to the left is B eating watermelon at Lake Wildwood in Northern California. Her grandmother owns a house there. Her family was all gathered in the area to attend B's cousin's wedding. I include this picture now (which was taken in later June) only to point out that in the spring I was working on some prose/poem pieces which envisioned this sort of scene. Two friends from CCA and I have been planning to put out a book of summery type poems/fictions. I wanted to write about a feeling of summer and when I thought of this feeling I envisioned this picture of B. It was an ideal time.
Posted by Jason R Jimenez at 10:38 AM 2 comments: