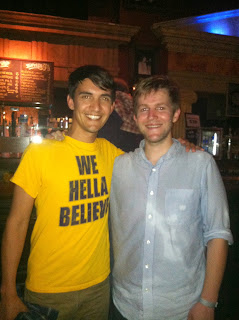 That's me and Chris Conley, singer/guitarist of Saves the Day. B and I saw Saves the Day not too long ago and it was an amazing experience. One that actually began well before the day of the actual show. At least over a year ago, I learned Saves the Day would be recording/releasing a new album. They've been one of my favorite bands since I was 18 years old. Their music has been a part of my life since then. I've lost track how many times I've seen them perform. I've also lost track how many times I've met Chris; this was the first time I thought to take a picture of our meeting. I'd guess the first time we met, we were probably 19 or 20 years old, and here we are in that picture at 31 and maybe 32? He's married and has a child. He still rocks on stage just as hard as he did way back when.

Some time after 2004 I stopped really paying attention to what Saves the Day was doing. I didn't stop listening to their music but I just didn't follow along as closely as before. Yet, when their next few albums came out I bought them and quickly fell in love with them. When I started grad school in 2010 they released their second most recent album. At some point, I made the discovery that this band was my favorite band. Their 2010 album Daybreak hit me hard (in the feels) and made more sense to me as a 28-29 year old than their earlier records had to my 18-19-20 year old self. Anyway, news of their newest record came and I started a long email chain with a few of my friends about our favorite Saves the Day songs. We rated and ranked our favorites, discovering along the way which songs we each felt closest to. Each email progressively proved to me how deeply I felt about this band. (In a way also reminding me how close I felt to my friends.)

I'm not unaware of what a lot of people think about the career of Saves the Day and more correctly of Chris Conley who basically is Saves the Day. I'm not going to defend them to music snobs; ok, but actually I might. Imagine this: inside Slim's, the night I saw them with B, every single person in the audience smiling, raging hard, and singing every lyric that poured out over us for 90 minutes and 30 songs. No band could not be respected for engendering so much love and enjoyment. I guess that's an argument in favor of superstar popstars. I don't know, maybe in the indie-rock world that I feel gave birth to me and this band, so much love seems an important antidote to the bland coolness of mid/early 2000s "indie rock", or emo, or whatever it is this music is called. Ok, actually, I guess emo involved quite a bit of emoting, heroification of the singers/lyricists, etc... but definitely there was a hipness to being into the music but not overly attached. Maybe that came just after emo re-exploded in the early 2000s. The point is I love this band. I am proud to nerd out so hard about what they've made.

I guess the realization is that this is the only life I will ever live and I think 'Oh my god, I've found something that I love, something that makes me feel understood, and look at all these other people who are probably feeling the same thing, goddamn this is the most amazing thing I've ever seen in my life..." Something like that. And then I realize that this thought is exactly what Saves the Day's new album is essentially about. Being so happy to have ever lived in the first place and just standing in awe at this simple and yet profound fact. I wore the We Hella Believe shirt because I thought Chris would like it. That he would understand it.

Here's a video from Saves the Day s/t new album.


It's important to believe. Like in August while I was helping out my friend at his print shop and I got an email from Publication Studio letting me know that they were going to be publishing my book. I have never felt so much excitement surge through my body. I didn't know whether I wanted to pass out, laugh, or cry, or I don't know...explode?

So more information will be coming up about that later on. The initial details are that it will be coming out some time early 2014. Also, it's being published as part of their Fellow Travelers Series. Kevin Killian's book Spreadeagle, which everyone should read, is also part of that series. Publication Studio also published Dodie Bellamy's the buddhist too so it's just crazy to me to be a part of something they are also a part of. (I know I gush about Dodie and Kevin a lot. I love them.)

Finally, a few weeks ago now, I think, two of my closest friends got married. I was the best man for the groom. It was second time being a best man of sorts - the first was also this summer when my cousin got married. I was her 'man of honor'. At my cousin's wedding, I didn't prepare a speech because I thought it would be better to speak from the heart. I think I did fine but I was overcome with emotion in the moment, I couldn't project my voice or make it through thoughts without crying. Also, when I try to explain things off the cuff, I resort to the most meandering proof of the rightness and clarity of my thought. As if I were giving voice to the philosophical argument going through my head. Then I speak too quickly and everyone gets lost, including me. I think it's because I feel what I say is a conclusion and I need to lead everyone to that conclusion. Anyway, I didn't want to speak without notes at my best friend's wedding so I wrote out everything I wanted to say a few days before and crafted it as if it were a reading. I printed out the notes and felt safe in knowing if I just stuck to the script, I would perfectly express what I wanted to say. In the moment, I was very nervous, but I stuck to my notes and only when I actually looked at the bride and groom did I feel overwhelmed by the emotion. So I stopped and caught myself so that I didn't burst into tears. The negative of reading from notes is that I felt in a type of daze, like I wasn't quite there, and now I don't remember what people looked like as I looked out over the reception. As soon as I was finished, I came out of the daze to find that people really liked my speech. So when I didn't read from notes, I felt more included in the moment but overcome by it. When I read from notes, I felt excluded from the moment but never overcome by the emotions. I think it would be nice to merge those two.

Posted by Jason R Jimenez at 1:00 PM No comments: