On Two Readings and Five Writers 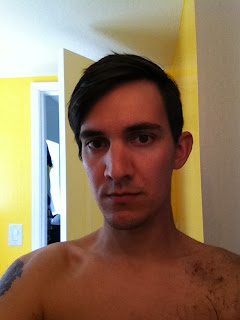 That's me after I shaved one half of my head. It had been growing out so long. I had this reading with Dodie Bellamy and Francesca Lisette coming up at Woolsey Heights (thanks to Andrew Kenower for inviting me!) and for whatever reason, if I don't feel like I look my best, I won't be my best, and so forth. It just leads to me feeling insecure. Dodie had promised me that the audience would be receptive to my work so I don't know why I would be so nervous. I guess, it's because never before any reading had I felt everyone in the audience would be a better writer/reader than me. That must sound silly. This would be my audience so I wanted to impress them. Any sign of me being a fraud and they would sense it immediately. Maybe I should think about why I don't have a certain confidence in myself when I'm in a room of people whom I feel are my peers. I remember a discussion B and I had where, this was my impression at least, she just wanted me to shout into the phone, "Because I'm the best!" Of course, maybe it's not about me being the best. Naturally, I am not trying to be better than the audience or my fellow readers - about Francesca and Dodie's readings in a minute. I just want to be among the many who people like and appreciate. Is it embarrassing to admit to such an ambition? I don't know. Anti-capitalist feelings pull me one direction and tell me to eschew popularity and capital and all of that. Why am I writing, really, if all I want is to be loved? Isn't writing to be loved a perfectly good reason to write? I think Rachel Hyman from Banango Lit posed this question on her Facebook and I tried to answer it sincerely. 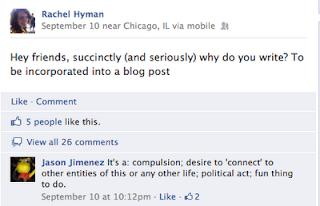 There is a feeling in me that I began to write stories to receive the attention. I remember in pre-school or perhaps early elementary signing up to read a story in front of the class. My memory now tells me I was doing it because I wanted everyone to like me. This goes to all kinds of questions about why we write and so on. What is writings purpose? Sorry, I can hear people yawning and saying, Oh god! after that question. I guess I stopped asking that question when I was in undergrad. I don't think writing needs a purpose. I will show my philosophical leanings here and say nothing has a purpose. Everything just is or becomes.

In any case, when I gave my reading with Dodie and Francesca, I was extremely nervous. I had chosen the end of the first part of my book - the part that is contemporary. It's all about sex and death and the main characters d/evolving into their chosen wild nature. It's my favorite part of the story and I'm really happy when I read it. I also pulled out a chunk of the second part of the book - the part about Catherine of Siena. I had never read anything from this story and I figured a receptive audience would be willing to go with me to 14th-century Italy. The best comment after I read was, "It's like Twilight, but good."

Francesca Lisette read after me. She's from England, and I'm not afraid to admit, I'm a sucker for accents. Isn't everybody? It's so easy to listen to someone who does not sound like you. It may mean something else to about being infatuated with imperial power but... Francesca's reading was hyper and relevant. She created these humorous moments for us and everyone laughed and then sped along to another image. I loved it. If I had had some money at the time I would have bought one of her books she had with her.

Then Dodie read. I think this was my favorite reading of Dodie's. Perhaps only because she was reading absolutely new work. Since I'm such a fan of hers I'm always pretty familiar with what's happening, but this time she was reading from her new book about (among other things) cults. I had heard her speak about the book but never any actual prose. So I was anticipating this for a while. As I watched her read, I realized that Dodie is pretty much a rockstar. She is such a master at delivering her writing. I found myself tearing up a bit because I was lucky enough to be her student. I wondered how many readings Dodie has given and how long it took for her to become so good at it? Maybe this is embedded into Dodie's writing but her readings feel as if she is merely speaking to you one on one, telling the most interesting and wild story - sometimes about herself - and at times you're laughing and at others you're flowing in the rhythm of her images. Because Dodie just published a book about a recent romantic relationship, I'm sure everyone has a good idea of what character "Dodie's" life has been like. But for this new book, Dodie the author is going back to a completely different time and for me it's enlightening to hear one of your favorite authors open up about other times in their life. 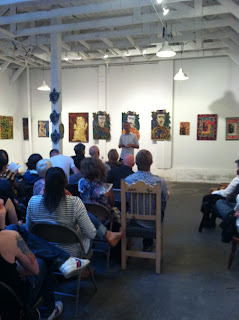 I don't remember if my reading was before or after Kevin and Rob's. Rob Halpern was my first creative writing teacher at UCSC - that's him to the left. I've only seen him a few times since that first quarter, but we've emailed quite a few times. I got to the reading a little late. All the seats were taken. Rob was standing up. I think Kevin was standing too. Rob said, And there's Jason. Then the audience turned and looked at me. I sat on the ground close to the wall. Rob read first from Music For Porn. I had heard about this book for a while but I think it just recently was published. I think what I love most about Rob's reading is the sound of his voice. The cadence of his words, obviously his images, his earnestness. I've always found his voice and his writing to have a particular type of weight to which I aspire. The interesting thing is it's been nearly 12 years since I first met Rob and he still looks the same to me. I don't know how much different I look but I know the student I was then does not resemble me now. I scratch my head now thinking how Rob could have recognized some small hope in the awful stories I wrote for him. Maybe he just saw the philosophical issues I was grappling with and then knew to offer me some help. Who knows. If I read my own stories now as a teacher, I probably would be embarrassed for the student. 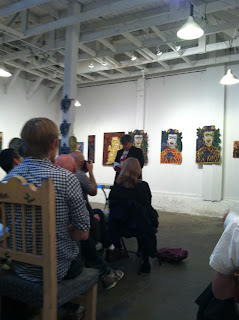 Then came Kevin - he's there to the left standing, Dodie right in front of him. Like Dodie, Kevin reads as if he is speaking to you one on one. Or at least that is how I hear it. He appears so relaxed, his storytelling feels direct and somewhat classic. His new book Spreadeagle seems complicated however, if only because he had to break from the reading to explain a character or something. This wasn't a problem at all for me because I love when the curtain is drawn away from the book and the author fills us in. I'm having this image come to me now of Kevin as Willy Wonka. Not the Johnny Depp version - though I love that version too. There's Kevin leading us into his vast factory and stopping in all the different rooms to explain the alien machinery and the little men who keep it all running.
Posted by Jason R Jimenez at 10:12 PM No comments: