Happy Birthday to me in New York 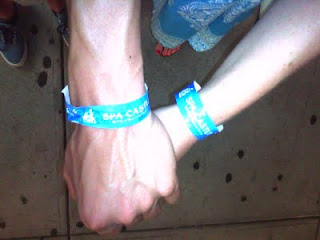 The humidity and weight of air was somewhat unexpected as I exited my plane to New York. I took a taxi into Brooklyn, disrobing into just my t-shirt and jeans in the backseat - which I found somewhat romantic. I met Berit at her apartment by 11 at night. I was sweating and tired but happy to see her. We ate tacos for dinner at Papacito's which is just around the corner from her apartment. For my birthday, Berit arranged for us to go to this spa called Spa Castle - those are the bracelets (in the picture) they gave us so that we could drink pina coladas and strawberry daiquiris. Spa Castle was way out in Queens. It was quite an adventure getting there, including a stop in a very strange Korean shopping center. Later in the week, Berit and I met with friends at a karaoke bar. The only explanation I had for the behavior of the other patrons of this karaoke bar was that Mercury was in retrograde. However, Berit and I later discovered that Mercury is no longer in retrograde so nothing explains the other patrons' behavior. They were or are just naturally aggro people. Berit and I had a Woody Allen dvd marathon which included Thai delivery. We sat in a gondola at a bar called Diamond; I couldn't find the horseshoes, but that didn't matter.

One thing I keep coming back to in my descriptions of being in New York is how good the food is here. I'm lucky because Berit loves food and already knows where the best places are. Or I'm just lucky that Berit and I share somewhat similar tastes in food (mac n cheese, veggie burgers, thai etc). Whichever way it is there are some insanely tasty things to eat in Brooklyn. For example, one night after Berit and I saw Woody Allen's new movie Midnight in Paris, we waited in line for maybe an hour to get into Grimaldi's Pizza. It was well worth the wait. We ordered a half carafe of wine and a large pizza with olives and ricotta cheese. To think of it now makes my taste buds go wild. Another day Berit and I met near Prospect Park for ice cream from Uncle Luigi's. It was a dreamy walk back to the subway.

On the plane ride to New York, I started and finished Dodie Bellamy's Academonia (there's a link to Dodie's blog to the right). I'm surprised to feel that I liked this collection more than what I've read previously (Cunt-Ups, The Letters of Mina Harker, REAL). Mina Harker has become a sort of cornerstone for my own writing, and I owe a lot to Cunt-Ups for freeing my prose in ways that had it not my current book would not be possible. I like the way that Dodie can bring anything and everything into her writing. Though she does it with care and I never feel as if she's trying to impress me. It's not as if Dodie is just piling in tons and tons of cultural references, but editing enough into the writing that a sense of honesty is created without her saying she's telling a true story - which at the moment she would say that it would become false. I've only read Academonia once but I know that I will enjoy going back to it to pull through things I might have missed.

On the plane ride to San Francisco, I finished Joan Didion's The Year of Magical Thinking - a few years ago Berit recommended it. Reading about death is never fun, but it usually affects me in a positive way. Though it's sad to read about the tragedy of another person, it is triumphant feeling when that person is Joan Didion and can get to the transcendence over our feelings and fears of death. I've only read Play It As It Lays and Where I Was From, and now The Year of Magical Thinking. I should have a better grasp on Didion's style, but I don't. I know that there is something specific she is doing in her prose, but I haven't figured it out. Whatever it is, it affects me.
Posted by Jason R Jimenez at 6:00 PM 1 comment: