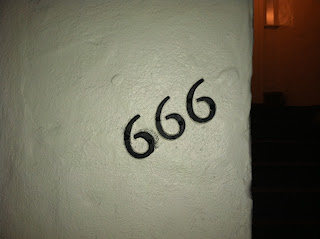 Saw this address in the Richmond district of San Francisco and took a picture of it. I think I was returning to my friends Jason and Jamie's apartment after drinks in the Inner Sunset. At some point we stopped near the DeYoung Museum and took pictures on our phones. It was late and there were hardly any people around. (I may be mixing two different nights)

I only partially intentionally included 9 chapters in the second part of my novel. When I realized I could squeeze everything into 9 chapters, I figured it made sense in terms of the demonic, etc. Also there are 27 chapters in the first part of the novel. Sometimes I wonder if all these little parts of my book will be discovered, whether I should alert everyone to them or not. I like the idea of leaving little bits for the reader to find on their own. I guess a lot of the latest revisions have been about making those discoveries for the reader more exciting and potentially powerful.

Recently, I received an email letting me know one of my 'stories' will be published in the next/final volume of The Encyclopedia Project. One of my former teachers co-edits the book. When I found out it was accepted, I was with my family in Sacramento for Christmas. My grandma asked me about the story. I pulled up the pdf on her laptop and read a little bit to my grandma, my mom, and my great-grandmother. My grandpa was in the living room and could hear me, I think. At certain parts my grandma laughed and that made me feel good. And she understood it. And that made me feel good. 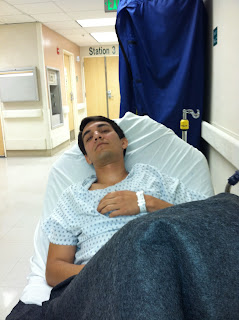 Here's a picture of me at Highland Hospital in Oakland. I wasn't feeling good then. I was on my way to work when my back and side started to hurt. I thought I just had to use the bathroom but after I unsuccessfully used the toilet at the MacArthur BART station, I remembered that I had felt this pain before, about a month earlier, though a much less intense version. I hurried home and called my dad who told me to not be stupid and go to the hospital. I would be stupid to not go because I don't have health insurance. The insurance I did have had expired about a month prior to this, actually.

I woke my roommate and asked her if she could help me get to the hospital. Luckily, there was a hospital right down the street so we walked there - a walk that should have taken 5 minutes but apparently took 30. This was a children's hospital however so they weren't really set up to help adults. But, regardless, they gave me some drugs and called an ambulance. My dad had called my mom and soon she was there too. The pain ended up being a kidney stone. I was taken to Highland eventually. I'm actually hamming it up in this picture because I was texting with my dad, and he had sent me a picture of himself in the hospital when he had a kidney stone. By this point I had been on drugs and in between and at hospitals since 8am and it was probably 4pm, and still I hadn't eaten anything. While I lie there, a man was brought in who had been shot in the back of the head. I like that behind me in the picture, the hospital seems empty and peaceful, I guess, but actually behind my mom there was an entire drama playing out.

I stopped writing this blog post so I could meet with two friends for coffee. While I waited for my friends to arrive I went into a bookstore and bought a magazine - Boston Review (BR). When I shop for groceries, I stare at the magazines the store places there so you might buy them last minute. In the past, I've never been tempted to buy the magazines, but recently, I've felt this urge to buy them all: the New Yorker, the Economist, Time, Newsweek, Vanity Fair, etc. For a while when I was living with B, the New Yorker was always around and I liked looking through it. I don't know why I never picked it up on my own. I resist the urge to buy the magazines in the store because I know if I just go online and subscribe I can get a better value. I haven't subscribed to anything yet. I will likely subscribe to Boston Review however. I started following the Boston Review on twitter because twitter told me I might interested in them based off of other accounts I follow. I don't follow many 'news' magazines, mostly literary journals so I thought at first the Boston Review was a literary magazine. After a while I noticed the BR's tweets were mostly about politics and while on my long work commutes I was actually reading the articles their tweets linked to. Basically, they grew on me. Then tonight when I saw their actual print version, I had to get it. I look forward to subscribing.

Posted by Jason R Jimenez at 6:15 PM No comments: