This is the Only Place 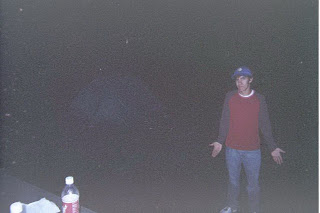 I realized recently my work computer had a floppy disk drive and so all these old floppy disks I've been holding on to could finally be gone through. There are about 10 of these disks. Most were full of college essays and drafts of stories  from when I was about 16 until probably 21. I found the picture to the left on the disk as well. It's me, obviously, dismayed that I and my two college friends could not get a fire started somewhere in the wilds of Alabama.

We had taken this road trip during the summer between freshmen and sophomore year of college. One friend and I flew to New Hampshire, where the other friend picked us up and drove us back into his hometown of Boston. From there we drove a southern route across the country. It had rained most of the day/night when this picture was taken, and we were just not having any luck getting a fire going.

Just a week ago I received an email from an agent letting me know they were passing on my book. I'm not entirely surprised. I've prepared myself for the numerous passes (or rejections as the realist might call them) I will surely receive. Nevertheless, it's still disappointing to receive a no. Oh, but I don't want to complain. Of course, I'm likely living closer to my dream than a lot of people get the chance to. There's a vast system of support beneath me which launched me toward being so privileged to even appeal to agents and people who publish books, writers and other makers and thinkers. 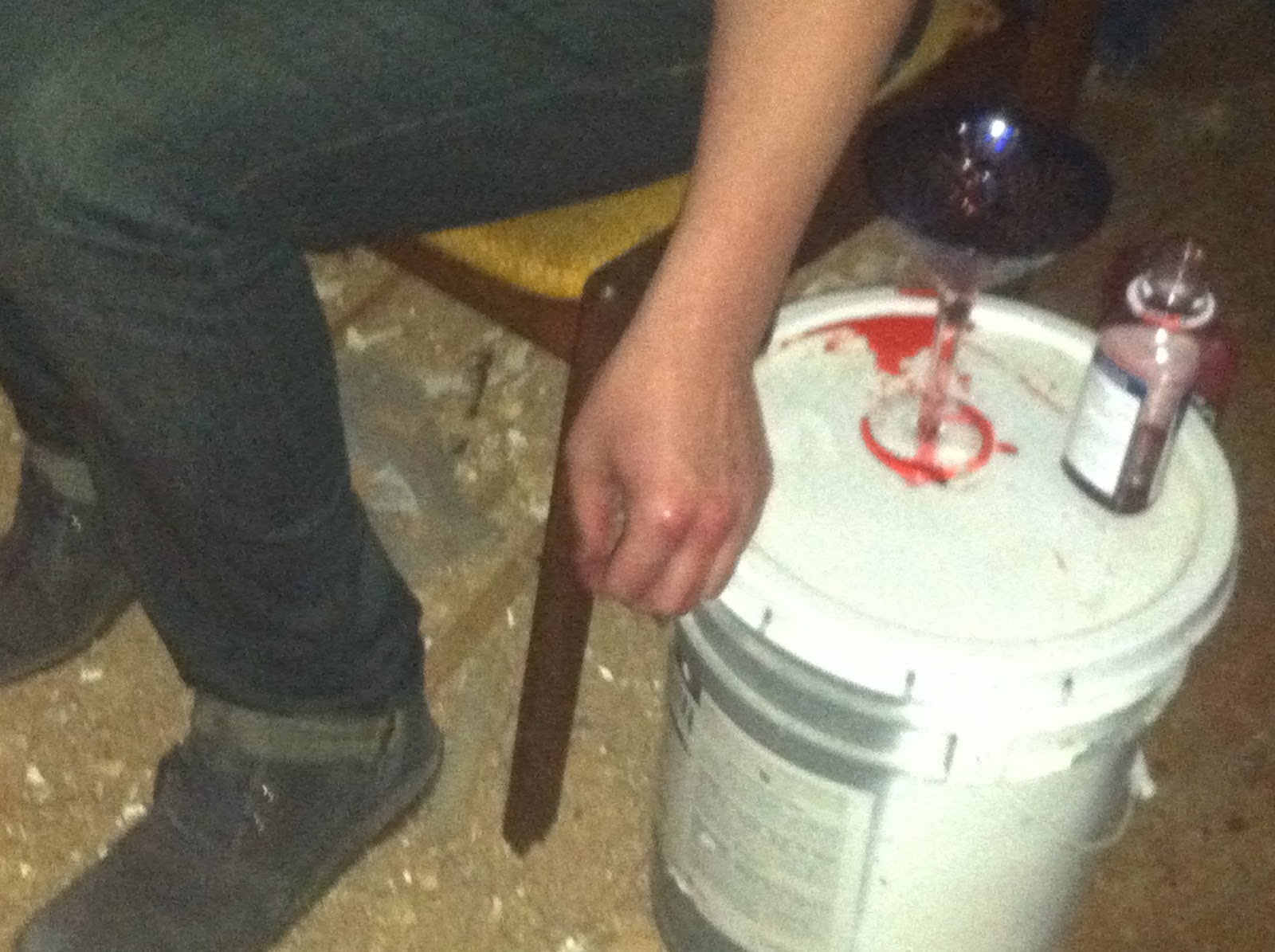 To the right there is a picture I took while at Janey Smith's 851: The Squat reading series. Brandon Brown was reading and just before he began he accidentally knocked over a martini glass full of cough syrup. You can't exactly tell from this but his hand appeared bloody. That is what I was hoping to capture actually. The martini glass full of cough syrup was there because the previous reader Cassandra Troyan was sipping from it while she read. I had hoped to also take a picture of her reading as well because she had hand-cuffed herself to this chair, but I thought a flash might disturb the environment, I'm sure no one would have minded, but seeing as I had spilled my drink just moments before, I didn't want to disrupt the proceedings any further. Beside her a laptop played a video. Cassandra seemed to be in a type of duet with the video. The images in the video were sometimes of cityscapes, the type you see while driving through a darkened town, or of a woman's legs. Shouts were heard. Meanwhile, Cassandra was reading, possessed maybe, bouncing between voices/phrases comical and corporeal. The micro-press Solar Luxuriance (run by Mike Kitchell and Cassandra) just put out Cassandra's book Throne of Blood.

Brandon Brown's reading was also wonderful. He read 3 pieces about his name, in addition to some others. After the reading was over, I spoke with him about my pleasure in hearing him offer periodic asides within his pieces, which I suspected were mostly built-in to the writing (he confirmed this). He came off as relaxed and improvisational - and that appears to be purposeful. And I love that about his reading. It's almost as if he's offering us a bit of stage banter but it's more important than that. A lot of wonderful readers do this, I think. Of the most recent readers I've seen, Dodie Bellamy, Kevin Killian, and Brandon Brown do it. I also remember, from quite a while ago, when Eileen Myles came to a class I was in (with Dodie actually) and I fell in love with the way Eileen seemed as if she were just speaking directly to you as she read. It's like at any moment the topic could change (and it often does), but as most conversations go, it will find its way back to the original concerns. Or maybe it won't, and then you wonder why not? 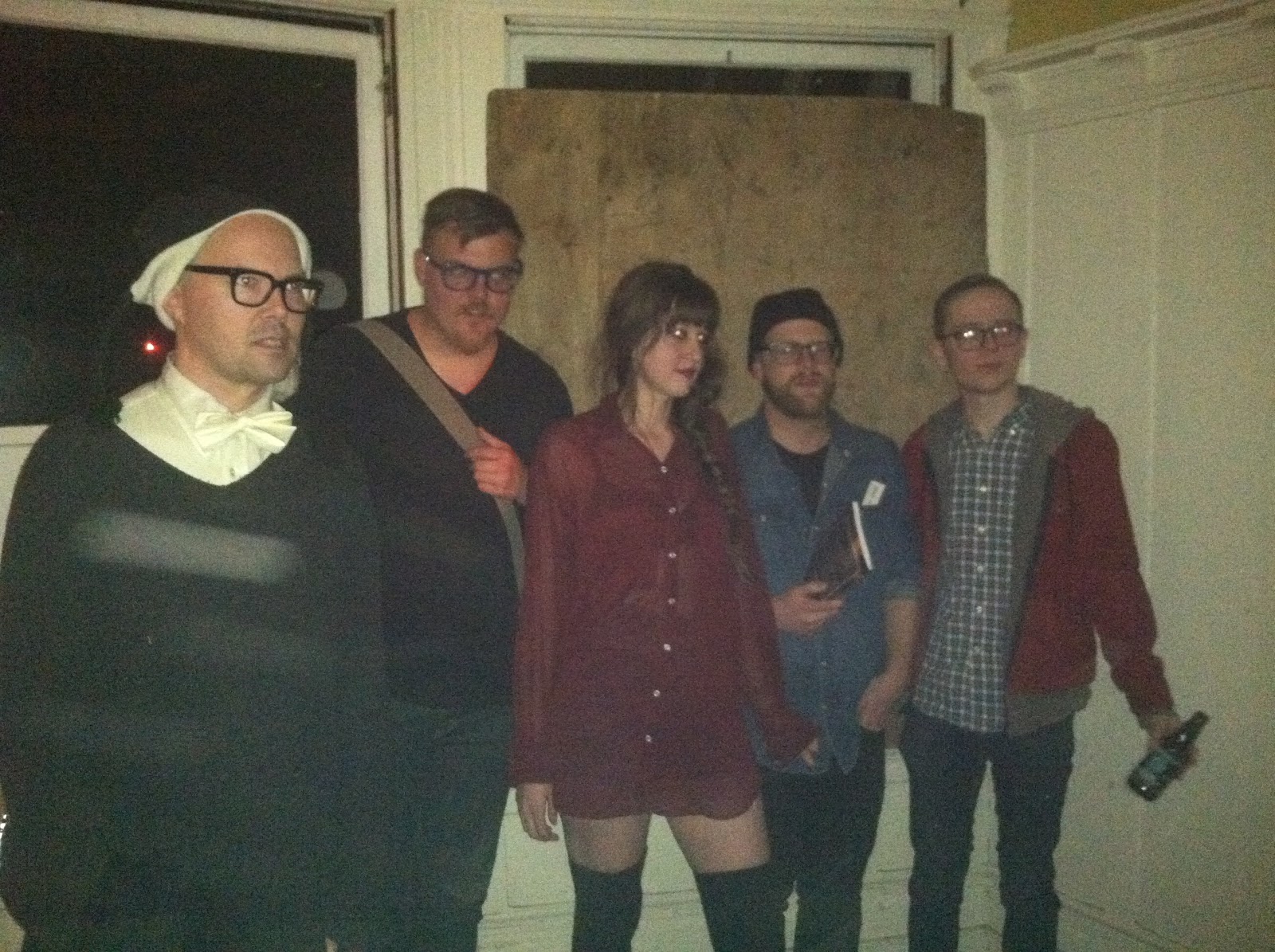 This is a picture at the end of the night. Janey thought to gather one representative of each of the writing communities in attendance. I'm not sure which communities they all represent, but the two people in red/burgundy might represent the new Alt Lit/internet writing scene (I'm sorry I didn't catch their names). Janey, far left, represents 851. Brandon, next, represents the East Bay scene. And Mike Kitchell, in the beanie, represents... I'm not sure, because I forgot how Janey organized it all. But, Mike would probably fall into the SF scene (if you go by regions). Really, I would classify him as 'writers I'm envious of for their output'. There are a lot of writers in that classification actually. 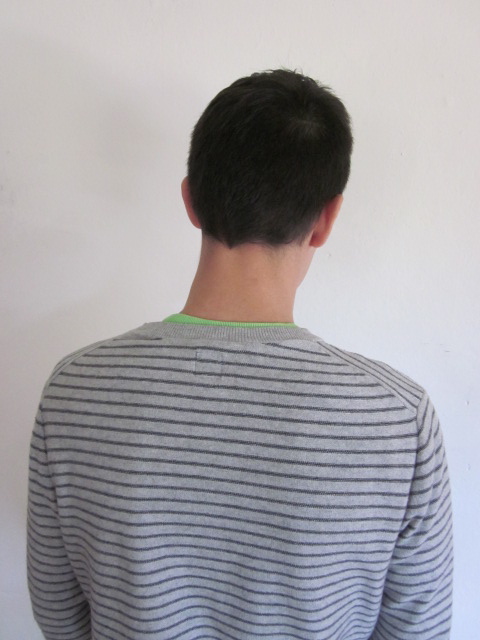 Finally, I wanted to add a picture taken by Kevin Killian as part of his "Eyes on the Prize" photography exhibition at [2nd floor projects]. Kevin came to my house a few days ago and we had a fun time, he taking my picture and me trying to be the best model I could be. There's a lot more to say about Kevin's photography project, but I will just encourage everyone to check out his exhibition. And if you're not in the Bay Area to do that, you might want to ask yourself why you don't live in the Bay Area... Why would you live anywhere else?
Posted by Jason R Jimenez at 1:26 PM 1 comment: