Party in the USA 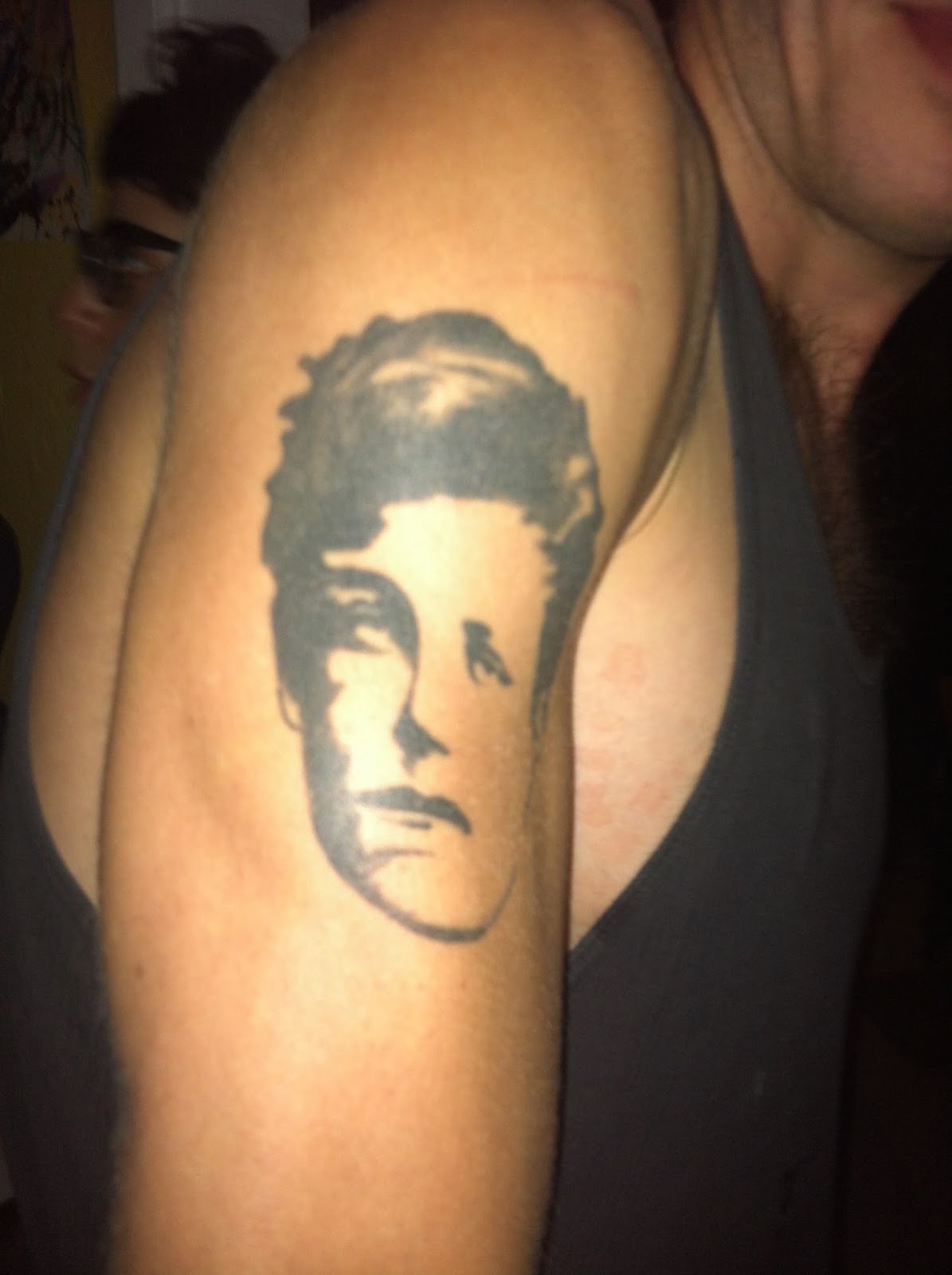 That's Ted Rees' Arthur Rimbaud tattoo. Oh and I think maybe Sarah Wintz's face emerging from Ted's back, I just noticed this. We were at Woolsey Heights for a reading by Alli Warren, David Brazil, David Buuck, Elaine Barry Kahn, and Melissa Mack. I was in a state of absolute exhaustion because I had been running around all day beforehand trying to accumulate housewares for my new room in my new house in Oakland. So I skipped lunch and right when I got to the reading I drank three or four cups of water. Finally, I awoke from the stupor in time to hear Brazil's reading which blew me away. All the readers were magnificent. Elaine and Alli had this casual delivery - even though Elaine said she was very nervous - which I really appreciated it. Melissa was reading from a book she had just published and somewhere in there she was talking about a memorization class. These were inside jokes and I wasn't inside but I didn't mind. Finally, Buuck read and for his last of three pieces he was joined by a soundtrack made by Tom Comitta. David's final line was "stand up" and at the moment we were all supposed to stand up... and we all did and then the music turned on and the lights went out and it turned into what Woolsey Heights almost always (or always) turns into which is a dance party - which I really appreciate because I love dancing and don't get to do it as much as I used to.

Off to another reading of sorts, Poem Talks organized by Sophia Dahlin: At the n/a space, Lindsey Boldt and Dodie Bellamy talked about one of their poems for an hour each and instructed us, the audience, in the poem's creation. This actually took place on the very day I moved and I was typically exhausted. I don't know why I was doing this to myself, but I feel like since I'm off work right now I really want to get in as much poetry as I possibly can. Lindsey had us write for a bit and when we were done we got to share. To my surprise I volunteered to read first. I don't know why I did that. I had written something about Kevin Killian being a basketball player. I think we were supposed to write something a little more internal/visceral, I don't know, I'm a novelist, I couldn't help but want to make a story out of the way Kevin had stretched his hand and I imagined him as a young hot shot basketball player, in the big game, peering to the side at his domineering father. I'm sure I'm recycling a movie here.

Dodie's talk was very interesting to me because in all my time of working with her I have never thought to ask about the process of her book Cunt-Ups. Dodie has a new book coming out from Les Figues Press. It's called Cunt Norton and she utilizes the same technique for it as she used for Cunt-Ups. That book was extremely important to me, or is rather, because it was the first book I read by Dodie prior to starting at CCA. I followed Cunt-Ups in a way for my book. In it, among other things, Dodie smashes these hyper-sexual flourishes into one another, separated by commas, identities shifting, bodies shifting. It's beautiful. If you've read my book, you will see when I'm following Dodie's lead. During her talk I wanted her to talk about someone on some site calling Cunt-Ups "experimental fiction" or something like that, but I guess that's not what we were there for. (Note: blogger says I'm misspelling cunt.) Below is what Google books says are common terms and phrases of Dodie's Cunt-Ups.

And well before all this there was the talk of the town: The East Bay Poetry Summit. I feel like it will be one of those weekends where time separates itself. Or like the question will be asked, Where were you during the Summit? I was only able to go to the reading at Woolsey Heights. It'd be difficult to explain what the scene was like. Past readings at Woolsey have been well attended, crowding the two living rooms with people... when I showed up for the Summit event, the people spilled out of the house, down the stairs, out into the courtyard. It was madness. I remember sitting near Brandon Brown on the steps, listening to the readers over the speakers. The audiences' applause was picked up by the microphone inside and then sent out to us on the outside. I think Brandon was smiling the entire time. True to form the reading ended in a dance party. I kept thinking I do not want this moment to end, I do not want this moment to end. But, eventually, we had to say goodbye, or I did really, and I walked home, thrilled and intoxicated.

It's a little bit difficult to say how I feel after all these readings, as a novelist. Part of me wants to go home and start writing poetry which I can then read for everyone. But that's just not what I do. Maybe I should do it? It would be totally nonsensical for me to even begin however because I'm working on another novel and I really just don't have time to work on other projects. Or actually, I'm working on the new novel, and several other novel-like projects and really just don't have time to do anything else. I suppose the energy which these readings create in me then gets funneled into my writing in other ways. Is it true prose/fiction writers sometimes don't read poetry? If you are reading this now and you write fiction/prose, you should go to a book store and pick up a poetry book, any one, and just start reading. I don't know what you should do if you're poet... I'd say read a novel I guess. Honestly, I might be content to just live with Rimbaud for all time. Like maybe Ted has the right idea.